I have been visiting the Lake Superior area (north and south shore) for many years now but this recent trip near Grand Marais (Minnesota) was the most magical and amazing so far. Many people feel Lake Superior is a place of healing and I was graced with this experience on a whole new level.
I went with a friend and we stayed at the Outpost Motel right along Hwy 61, an affordable place with personal touch and very friendly owners (and chipmunks!!).
We always forget something on these trips but never would I have imagined I would forget my battery charger for the camera! I knew I brought a spare battery so I wasn't too worried until I found out that this spare only had 1/3 charge on it!! Then I started to get seriously concerned and contacted 2 photographers in the area who I knew were using the same camera as me, hoping we could meet in town and I could borrow their charger for an hour. Unfortunately that plan didn't work out. We had planned a night shoot which means long exposures and more drain on the battery. I was very careful in the use of my camera and hoping for the best.
By the time of the night shoot I had about 20% charge left and all went well. I must say, Nikon makes some really good batteries!!
The following photos were all taken at the same location - a small island (also called a "Tombolo") along the Lake Superior Hiking trail. As it was very close to our motel we went there four times during our short stay. And every time was different - sunsets and sunrise and finally the night shoot. I have been waiting for 8-9 years now to shoot the Milky Way at Lake Superior and finally it all lined up perfectly. The night sky was incredible and impossible to describe. And Jupiter was so bright that the light reflected off the lake. As we were taking photos a small, red light appeared on the horizon and at first we thought it was a ship but as it turned out it was planet Mars!!

As always, thanks for viewing and
Enjoy! Susanne

Posted by Soul Centered Photography at 6:07 AM No comments:

June is Lupin season around many Lake Superior shores. They bloom in abundance along roadsides and are a sight to behold. The most common color is a deep blue, but white, pink, rose and lavender colors are mixed in as well. They are not native to the region, but probably were introduced in the 1960s as an ornamental plant originally from the Pacific Northwest.
I took a trip to the Bayfield, Washburn and Cornucopia area in northern Wisconsin and found myself in "Lupin Heaven"!! The flowers have a very pleasant fragrance. I stopped numerous times and clicked away with my macro lens. The conditions were challenging due to the wind and bright sunlight but I ended up with some keepers.
I found these Fun Facts about Lupins online:
Lupin or Lupine is any species of the genus Lupinus, annual or perennial herbs or shrubs of the family Leguminosae.
There are about 200 different species of lupins in the world.
They are native to North and South America, North Africa and the Mediterranean.
Today, they are found all over the world exept in polar regions.
The term lupine, from the Latin for “wolf,” derives from the mistaken belief that these plants depleted, or “wolfed,” minerals from the soil. The contrary is true, however; lupines aid soil fertility by fixing nitrogen from the air in a soil form useful for other plants.
In New Zealand lupins have escaped into the wild and grow in large numbers along main roads and streams in South Island.
The species are mostly herbaceous perennial plants from 0.3 to 1.5 m (1 to 5 ft) tall, but some are annual plants and a few are shrubs up to 3 m (10 ft) tall.
Most species have compact, upright flower spikes, and through hybridization and selection some highly ornamental varieties have been developed.
They have a characteristic and easily recognized leaf shape, with soft green to grey-green or silvery leaves with the blades usually palmately divided into 5–17 leaflets or reduced to a single leaflet in a few species of the southeastern United States; in many species, the leaves are hairy with silvery hairs, often densely so.
The flowers are produced in dense or open whorls on an erect spike, each flower 1–2 cm (0.4 to 0.8 in) long. The pea-like flowers have an upper standard, or banner, two lateral wings, and two lower petals fused into a keel. The flower shape has inspired common names such as bluebonnets and quaker bonnets.
The fruit is a pod containing several seeds.
They are widely cultivated, both as a food source and as ornamental plants.
As a garden flower the lupine is a favorite because of the various colors and the tall spikes of bonnet-shaped blossoms. Purple color is most common, but there are also blue, yellow, pink and white varieties.
Many annual species of lupins are used in agriculture and most of them have Mediterranean origin.
Lupin flower symbolizes happiness and imagination.
Lupin or lupini beans are the yellow legume seeds of lupins. They are traditionally eaten as a pickled snack food, primarily in the Mediterranean basin and Latin America. The bitter variety of the beans are high in alkaloids and are extremely bitter unless rinsed methodically.
Like other legumes, they can fix nitrogen from the atmosphere into ammonia via a rhizobium–root nodule symbiosis, fertilizing the soil for other plants. This adaption allows lupins to be tolerant of infertile soils and capable of pioneering change in barren and poor-quality soils.
Bluebonnets, including the Texas bluebonnet (L. texensis), are the state flowers of Texas.
Enjoy! Susanne 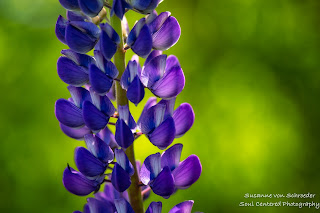 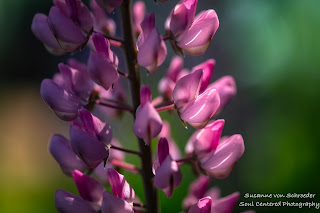 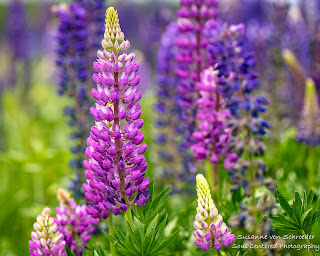 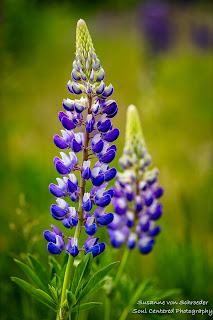 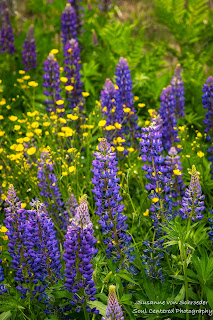 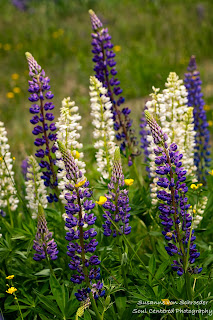 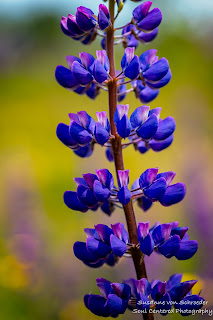 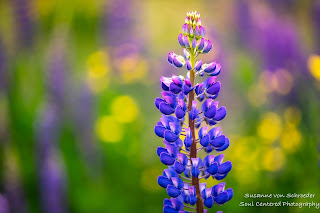 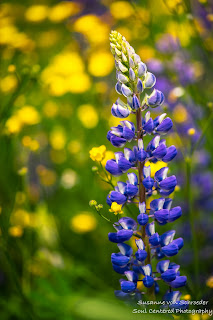 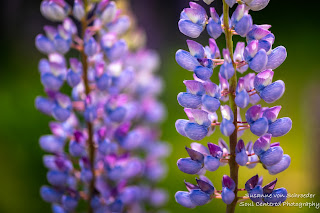 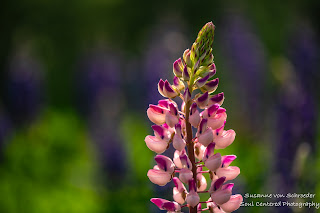 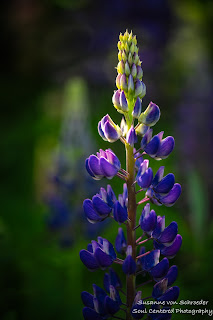 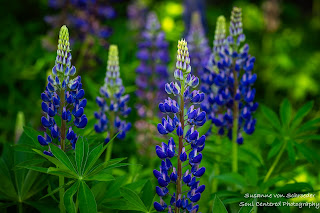 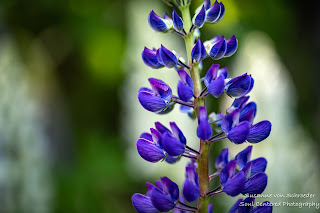 Posted by Soul Centered Photography at 6:26 PM No comments:

On June 11, 2020 I went on a day trip to the north shore of Lake Superior with 2 friends who had never been there. The weather was amazing with cooler temperatures, blue sky, white clouds and brilliant colors. Somehow it felt like being in a different world.
The Lupins were in bloom but it was too windy to get any good photos so I included one from an earlier year.
We spent most of the time at Split Rock Lighthouse State Park.
And on the way home we stopped at Gooseberry Falls State Park for a short visit.

I let the photos speak for themselves.
Enjoy! Susanne


Posted by Soul Centered Photography at 2:17 PM No comments:

It's been some time since I have been to the Porcupine Wilderness area in the UP, Michigan. A few days ago I visited with friends and we spent a wonderful day together. It was a warm, humid day and we met only a handful of people. The campgrounds and the Visitor Center were still closed due to the Covid 19 situation.
My favorite section of the huge park is the walk along the Presque Isle river with several waterfalls and the old growth forest. To walk amongst those trees is always very special and I wish I could stay there forever!! I added a few photos at the end from a visit in early autumn. It was a rainy, cloudy day and perfect for taking waterfall photos.
The other highlight is the overlook of Lake of the Clouds, at the other end of the park. It is spectacular in autumn with all the fall colors but even on a summer day with all the shades of green and a blue sky it doesn't disappoint. It was very windy and we had fun watching various birds (eagles, turkey vultures) from above.
Then we hoped we could spend some time at the shore of Lake Superior and relax - but that turned out to be impossible due to black flies and another kind of fly that literally covered our bodies (some were biting) and we had to run back in the car!
We returned to the Presque Isle river where the temperatures were dropping and a cool breeze from Lake Superior felt like "air conditioning"!!
I was able to get a few photos of the river that was partly in shade and partly in sun which created an interesting contrast in colors.
Here is some info from the Web:
At roughly 60,000 acres, Porcupine Mountains Wilderness State Park is Michigan’s largest state park. It is home to 35,000 acre old-growth forest, roaring waterfalls, miles of rivers and streams, more than 90 miles of hiking trails, the Lake Superior shoreline and vistas unrivaled anywhere in the Midwest.
This park boasts many popular natural attractions, including Lake of the Clouds, the Summit Peak observation tower and the scenic Presque Isle River corridor.

As always - thanks for viewing and enjoy!

Posted by Soul Centered Photography at 4:46 AM No comments: