Finally I was able to go kayaking on my favorite lake, Audie Lake, in the Blue Hills (Wisconsin). The first trip was partly cloudy/sunny which created a more dramatic mood and the dominant colors were blue and white and green. (see first 3 photos).

For the second trip I left earlier so I could be on the lake by sunrise. The fog was gliding across the calm water of the lake and it seemed like the world was standing still. I watched a pair of loons with their baby chick from a distance as they were floating through the golden mist. One of the loons (I assume the male) swam towards me to check me out and to guard his family. Close to the loons were three otters doing their thing, catching and munching on their breakfast. It was fun to watch them and their sleek bodies were shining in the golden sunlight. I was too far away to get any good photos.

I had some issues with my camera, something was different but I wasn't able to figure it out. I kept taking photos and was hoping for the best. When I downloaded the photos on my computer I noticed that the files were very low resolution. I had taken all the photos in video mode (!!) - who knew that you could take still photos in video setting! It was a beautiful morning but the photographer in me was not happy !!!

So a few days later I went out again and I am so glad I did. This time I made sure all the camera settings were correct. And I experienced another magical golden morning with fog lingering on the lake.

I met the loon family and the otters at exactly the same location again! Maybe they are creatures of habit and they have their morning routines - just like us humans!

Sometimes I am left speechless when out in nature and words fail to describe the beauty I see and experience. Here is a quote from Rumi:

Silence is the language of God

all else is poor translation.

The inspiration you seek is already within you.

Enjoy my little kayaking adventures and thanks for viewing. 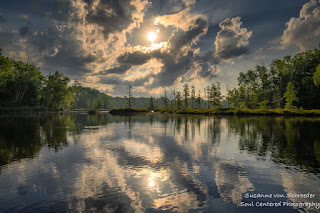 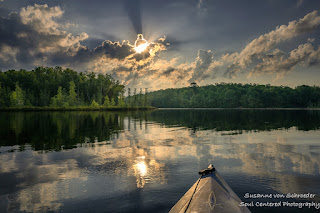 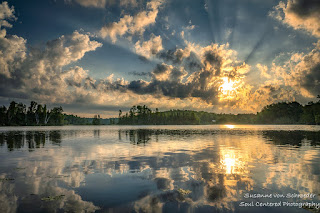 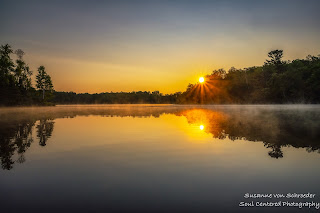 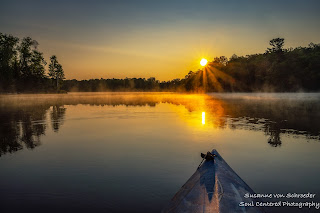 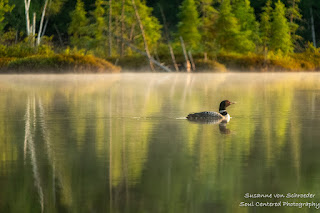 Early July I was able to go for a short camping trip to one of my favorite camp sites at the Temperance River State park, Minnesota. The camp site is really close to Lake Superior and listening to the sounds of the waves is very soothing, especially at night.

On my way I stopped at Caribou Falls and went for a hike along the river. There are so many unique and different waterfalls along the north shore but Caribou Falls is one of my favorites. The sun disappeared behind clouds long enough for me to take a few long exposure images of the falls. I continued walking upstream along the Caribou river and enjoyed being amongst the old trees listening to the sounds of the water. This is truly my happy place!

I was hoping for a clear night to take photos of the Milky Way but clouds started to move in. I got up early to watch the sunrise which was partly cloudy as well but beautiful nevertheless, with a band of orange color at the horizon.

I spent the rest of the morning hiking along the Temperance River. I hardly took photos of the waterfalls but instead paid more attention to flowers and plants along the trail. The wild roses were in full bloom spreading their fragrance! Dainty Harebells (Campanulas) were growing and blooming in rock crevices - I am always amazed how some plants can thrive in these conditions.

As always, thanks for viewing and enjoy this selection of my hikes along the rivers and amongst the ancient trees. 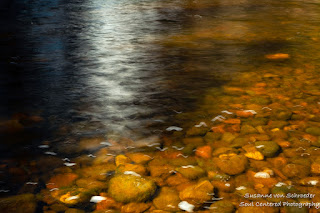 Posted by Soul Centered Photography at 7:37 PM No comments:

A short and pleasant visit at Cascade River State park in mid June, 2021 - along the north shore of Lake Superior, Minnesota.

I arrived at the campground in the early afternoon and went for a hike to Lookout Mountain. Along the trail through the forest I saw wild roses and a group of Pink Ladyslippers. On the top I was rewarded with a grand view towards Lake Superior!

In the evening I enjoyed sitting at a campfire. My friendly neighbors helped me getting the fire going!! Their kindness warmed my heart.

As it was a clear night I decided to go to the shoreline to spend some time stargazing. Never have I seen Lake Superior this calm!  It is difficult to put into words what I felt that night -  sitting on a rock and looking into infinite space made me feel very small. Then Saturn rose above the horizon, leaving a trail of light in the water. A night that I will remember for a long time.

The next morning I spent exploring the Cascade River, taking photos from different view points.

After a short visit to Grand Marais it was time to head home again. The Lupins were in full bloom all along Hwy 61. They put on quite a show this year.

Enjoy the photos and as always, thanks for viewing.

Some information about the State Park:

Aptly named, the Cascade River flows down one ledge after another for a total drop of 900 feet in the last three miles of its journey to Lake Superior. The park setting is a boreal hardwood-conifer forest of aspen, birch, fir, spruce and cedar. Visitors can stand on the footbridge that spans the river, or at any of the viewing spots above the river, and feel the vibration of the rushing torrent of water as it cascades down a volcanic canyon.

Its geologic history is what really makes the dramatic landscapes of the North Shore and Cascade River State Park. It started 1.1 billion years ago, when the ancient continental bedrock split apart and became covered with molten lava which welled up from below the Earth’s crust. This formed nearly all the bedrock underlying the North Shore, including this park. Soon after this intense volcanism stopped, streams deposited sediment over the lava beds. Much later, starting about 2 million years ago, great glaciers from the north scoured the area several times, leaving the present Lake Superior basin. Erosive forces, especially the rivers and lake waves, are still in action today. The Cascade River, one of the largest of the North Shore rivers, is constantly deepening its gorge as it cuts down through the ancient basalt lava flows.

Posted by Soul Centered Photography at 4:58 AM No comments: